The brain is a soft, spongy mass of tissue. It is protected by the bones of the skull and three thin membranes called meninges

Watery fluid called cerebral spinal fluid (CSF) cushions the brain. This fluid flows through spaces between the meninges and through spaces within the brain called ventricles.

The brain and nearby structures

The brain directs the things we choose to do (like walking and talking) and the things our body does without thinking (like breathing). The brain is also in charge of our senses (sight, hearing, touch, taste, and smell), memory, emotions, and personality.

The three major parts of the brain control different activities: 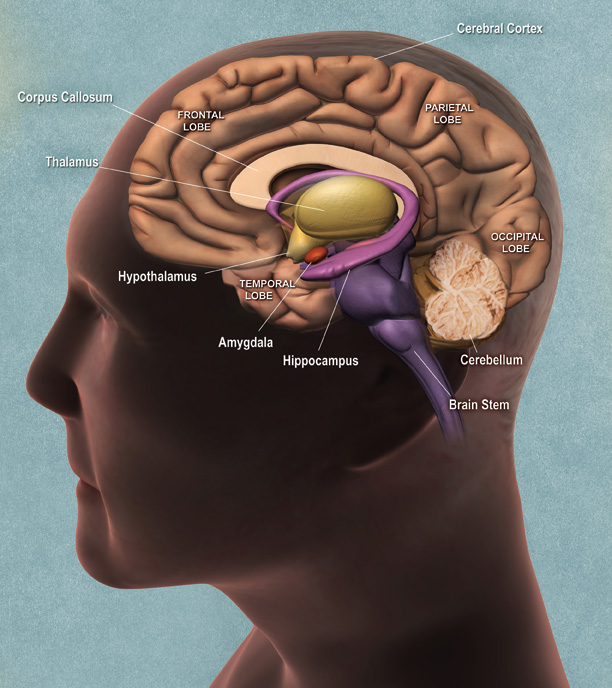 The cerebrum is the largest part of the brain. It is at the top of the brain. It uses information from our senses to tell us what is going on around us and tells our body how to respond. It controls reading, thinking, learning, speech, and emotions. The cerebrum is divided into the left and right cerebral hemispheres, which control separate activities. The right hemisphere controls the muscles on the left side of the body. The left hemisphere controls the muscles on the right side of the body.

The cerebellum is under the cerebrum at the back of the brain. The cerebellum controls balance and complex actions like walking and talking.

The brain stem connects the brain with the spinal cord. It controls hunger and thirst. It also controls breathing, body temperature, blood pressure, and other basic body functions. 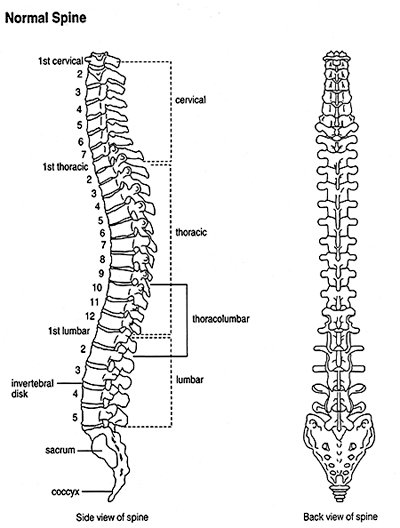 The spinal cord is cushioned by a fluid called Cerebral Spinal Fluid (CSF), which protects the delicate nerve tissues from being damaged by rubbing against the inside of the vertebrae.

Although the hard vertebrae and CSF protect the soft spinal cord from injury most of the time, the spinal column is not all hard bone. Between the vertebrae are discs of semi-rigid cartilage, and in the narrow spaces between them are passages through which the spinal nerves exit to the rest of the body. These are places where the spinal cord is vulnerable to direct injury.

Like the vertebrae, the spinal cord is also organized into segments and named and numbered from top to bottom. Each segment marks where spinal nerves emerge from the cord to connect to specific regions of the body. Locations of spinal cord segments do not correspond exactly to vertebral locations, but they are roughly equivalent.

The functions of these nerves are determined by their location in the spinal cord. They control everything from body functions such as breathing, sweating, digestion, and elimination, to gross and fine motor skills, as well as sensations in the arms and legs.

An injury to the spinal cord may inhibit the functioning of any nerves located below the site of injury. 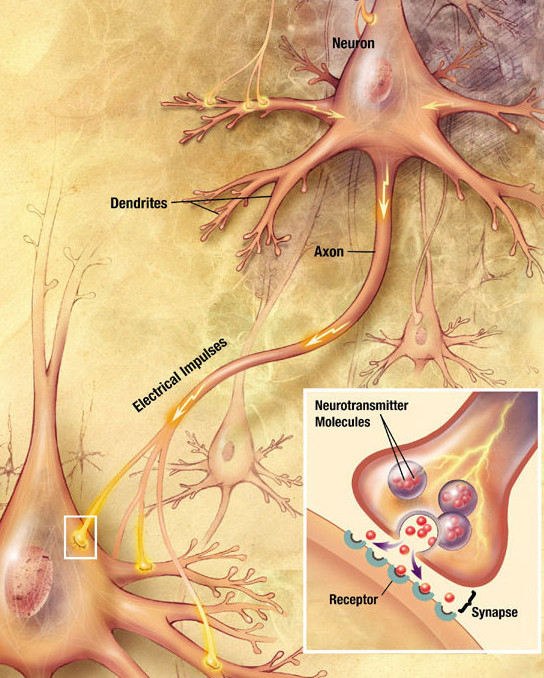 Neurons are the cells that transmit signals through the brain and spinal cord and out to the body. Neurons are unique in their ability to send signals to specific target cells over long distances. They send these electrochemical pulses through an axon, which is a thin fiber that extends from body of the neuron to other cells.

Some disorders are related to alterations in neurotransmitter levels. For instance, Parkinson's disease is associated with a decreased in levels of the neurotransmitter dopamine in certain parts of the brain.

The nervous systems has many other cells, such as glial cells, that perform a variety of critical functions, such as providing structural support and improving the nerve signal speed.