Psoriasis is a chronic skin disorder that causes red, scaly patches on the limbs, trunk, scalp, and other parts of the body. It is not contagious.

The rash of psoriasis goes through cycles of improving and worsening. A period of worsening is called a "flare". At times, psoriasis can be disfiguring, uncomfortable, and even painful.

The scaling and unpleasant appearance of psoriasis lesions (especially if left untreated) can cause embarrassment and be a significant source of anxiety or depression. Psoriasis can also interfere with sleep and make everyday tasks difficult.

Psoriasis can occur anywhere on the body. However, people tend to have areas that are more prone to developing lesions than others. Some places are particularly challenging to treat, including the scalp, face, hands, feet, and nails. 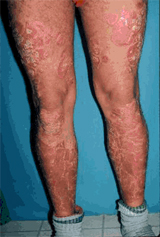 Each psoriasis outbreak can vary in severity. A mild outbreak, with small dandruff-like scales limited to one spot, could be followed by a severe outbreak with large thick plagues covering multiple parts of the body.

There are several ways to measure psoriasis severity. One simple approach is to measure the amount of the body covered by psoriasis. This is described as the percentage of body surface area.

Severity is also influenced by the type of psoriasis, the impact the illness has on a person’s quality of life, and a person’s susceptibility to side effects from treatment. Psoriasis is generally considered severe if it covers the palms and soles because of its impact on a person’s ability to walk and perform day-to-day tasks.

Normal skin cells (keratinocytes) start growing in the deepest layers of the skin (epidermis) and rise to the surface as they mature. The mature cells at the surface eventually fall off from everyday wear and tear and are replaced by newer cells below. This process usually takes 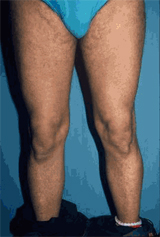 In skin affected by psoriasis, this process is accelerated and takes just a week or more. The skin cells multiply quickly and accumulate on the surface in silvery scales. This rapid growth is the result of a problem with the immune system.

Under normal circumstances, the immune system’s T cells patrol the body looking for bacteria or other foreign substances. The T cells’ attack on such invaders is called the immune response. People with psoriasis have overactive T cells that trigger an increased production of skin cells.

Many of the treatments for psoriasis are aimed at controlling the immune response.

What triggers a psoriasis flare?

Although the cause of a particular outbreak may not be known, some common triggers of psoriasis flares have been identified, including: