Scoliosis is a musculoskeletal disorder in which there is a sideways curvature of the spine, or backbone. The bones that make up the spine are called vertebrae. Some people who have scoliosis require treatment. Other people, who have milder curves, may need to visit their doctor for periodic observation only. 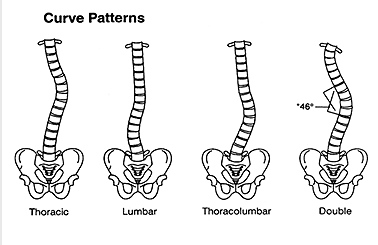 People of all ages can have scoliosis, but this booklet focuses on children and adolescents. Of every 1,000 children, 3 to 5 develop spinal curves that are considered large enough to need treatment. Adolescent idiopathic scoliosis (scoliosis of unknown cause) is the most common type and occurs after the age of 10. Girls are more likely than boys to have this type of scoliosis. Because scoliosis can run in families, a child who has a parent, brother, or sister with idiopathic scoliosis should be checked regularly for scoliosis by the family doctor.

In 80 to 85 percent of people, the cause of scoliosis is unknown; this is called idiopathic scoliosis. Before concluding that a person has idiopathic scoliosis, the doctor looks for other possible causes, such as injury or infection. Causes of curves are classified as either nonstructural or structural.

How Is Scoliosis Diagnosed?

Doctors take the following steps to evaluate patients for scoliosis:

Doctors group curves of the spine by their location, shape, pattern, and cause. They use this information to decide how best to treat the scoliosis.

Does Scoliosis Have to Be Treated? What Are the Treatments?

Many children who are sent to the doctor by a school scoliosis screening program have very mild spinal curves that do not need treatment. When treatment is needed, the doctor may send the child to an orthopaedic spine specialist.

The doctor will suggest the best treatment for each patient based on the patient's age, how much more he or she is likely to grow, the degree and pattern of the curve, and the type of scoliosis. The doctor may recommend observation, bracing, or surgery.

Are There Other Ways to Treat Scoliosis?

Some people have tried other ways to treat scoliosis, including manipulation by a chiropractor, electrical stimulation, dietary supplements, and corrective exercises. So far, studies of the following treatments have not been shown to prevent curve progression, or worsening:

Can People With Scoliosis Exercise?

Although exercise programs have not been shown to affect the natural history of scoliosis, exercise is encouraged in patients with scoliosis to minimize any potential decrease in functional ability over time. It is very important for all people, including those with scoliosis, to exercise and remain physically fit. Girls have a higher risk than boys of developing osteoporosis (a disorder that results in weak bones that can break easily) later in life. The risk of osteoporosis is reduced in women who exercise regularly all their lives. Also, weight-bearing exercise, such as walking, running, soccer, and gymnastics, increases bone density and helps prevent osteoporosis. For both boys and girls, exercising and participating in sports also improve their general sense of well-being.