Swimmer's itch describes a type of itching rash that appears on the skin after swimming. It is caused by being exposed to water that is infested with the larvae of a worm that normally affects birds. Technically, it is called cercarial dermatitis, but it may also be referred to as "sea lice" when it occurs after swimming in sea water.

(There are other causes of itching rashes that may occur after swimming, including "sea bather's eruption" caused by jellyfish, or exposure to some chemicals). 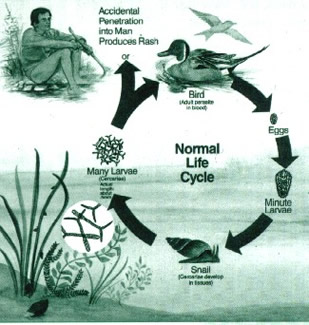 Cercarial dermatitis is caused by exposure to the parasitic flatworms (schistosomes) that infect as ducks or geese. The larval form of the worm, called cercariae, are released into the water by snails. These cercariae can mistakenly penetrate human skin.

The larvae die after entering the skin, however, their presence can trigger an allergic reaction, similar to coming into contact with poison oak or poison ivy.

People who have never been exposed to the larvae may not show any symptoms because they have not been previously sensitized. However, repeated exposures are more likely to lead to more severe reactions.

Symptons include an itchy or tingling sensation followed by tiny red spots at the sites where the larvae penetrated the skin. An intense itching rash may develop several hours later along with red spots that have evolve into pimple-like bumps, or hives. Some of the lesions may develop into blisters after 1-2 days.

Those affected may notice the rash sparing the skin that was covered by their bathing suit. This is because the fabric can prevent the larvae from coming into contact with the skin.

Mild cases may be treated with cool compresses or bathing with colloidal oatmeal to help soothe the rash.

An antihistamine may be taken by mouth or corticosteroids, such as hydrocortisone, may be applied to the skin to help control the itching.

In severe cases oral corticosteroids (prednisone) may be prescribed.

When and Where Does Swimmer's Itch Occur?

Swimmer's itch may occur anywhere that infected snails and birds meet, in fresh or saltwater. Although, more common on the Atlantic coast, outbreaks have occurred all over the U.S.

Swimmer's itch is more likely to occur in the summer and early fall when the water temperature is optimal for snails to grow and migrating aquatic birds return from their winter habitat.

Toweling off immediately after swimming may help prevent the rash because some forms of larva penetrate the skin as the water dries.

Avoid shallow, warm water where the snails grow in greatest numbers. (Small children tend to show symptoms most frequently because they swim in these areas.)

Where can I learn more?

(Note: There is a tropical illness called schistosomiasis that is caused by infection with a parasite acquired from snails, but this occurs in tropical countries, primarily in Africa. The organism that causes swimmer's itch in North America does not cause schistosomiasis.)